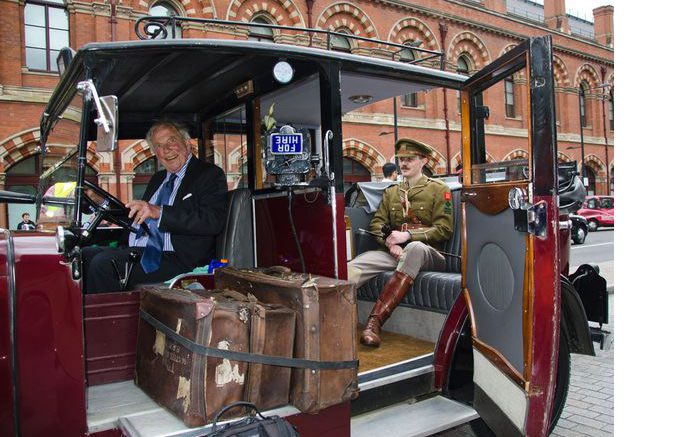 … returns from the killing fields of World War One to meet today’s veterans.
Writer and soldier Wilfred Owen is world famous for documenting the terrible slaughter of the so called Great War.
And he was remembered yesterday when a lookalike actor recreated his fateful journey from London to Edinburgh exactly 100 years after Owen made the trip.
The Owen lookalike, who was joined by Wilfred’s nephew Peter Owen, met modern veteran Mick McConnell who lost his foot in an bomb blast in Afghanistan.
Former RAF Police dog handler Mick, 42, from Elgin, now works with Bravehound, a charity that provides support and therapy dogs to forces veterans.
He said: “The first I learned about Wilfred Owen was when I saw infantry guys in Afghan with his words tattooed on them.

“I saw a few who had Dulce et Decorum Est tattoos from his poetry. So, his work is very poignant and resonates as much today as it did 100 years ago.”
On June 25, 1917, Wilfred Owen quietly decided to get on-board the overnight train from London’s King Cross to Edinburgh Waverly to spend time at Craiglockhart Hospital, Scotland, for shell shock, known today as PTSD.
This journey was to change his life forever when he met the anti-war poet Siegfried Sassoon at the hospital and the two struck up an incredible friendship.
Wilfred Owen’s nephew Peter Owen followed in his uncle’s footsteps by traveling on the overnight train before meeting children from Tynecastle High School where Wilfred Owen taught.

Once Wilfred Owen left Craiglockhart, he returned to the front and sadly died on November 4, 1918 aged just 25. He was a Lieutenant in the Manchester Regiment, 5th Battalion, and is buried at the Commonwealth War Graves Commission’s Ors Communal Cemetery in France.

Peter Owen, President of the Wilfred Owen Association, said: “My uncle’s poetry has influenced poets of all times and ages and his legacy was only made possible through a meeting of minds with Siegfried Sassoon at Craiglockhart.
“If my uncle has an afterlife, no aspect would have pleased him more than the way his words have been used and modified by poets that came after him.
“ A poet’s poet, Wilfred said of himself but would have never dreamed of his ever-growing legacy. This all began here in Edinburgh, at Craiglockhart.
“Wilfred would have appreciated and been very grateful and pleased by the honour of being welcomed here.”
The event kicked off a host of events to celebrate the poet’s work.
The Wilfred Owen Association, whose new patron is Hollywood actor, Sir Daniel Day-Lewis, was formed in 1989 to commemorate the life and work of the renowned poet who died in the final week of the First World War.

She said: “ Through his poetry, Wilfred Owen spoke out for the soldiers of the Great War. In his final letter to his mother he said ‘Of this I am certain you could not be visited by a band of friends half so fine as surround me here’.
“I think of these words whenever I talk to the veterans who come to us at Glen Art and Bravehound, they are the finest of men and women. It is a huge honour to be part of these commemorative events, and to do what we can to support veterans of today.
“Owen’s words will never be forgotten, and at Glen Art we believe that the best way to honour Owen’s memory and that of all of the who died or whose minds were shattered by their experiences in the First World War is to support the veterans of today, we can only do this with the support of the public, whether donating funds, or volunteering time or expertise we would very much welcome your support.”