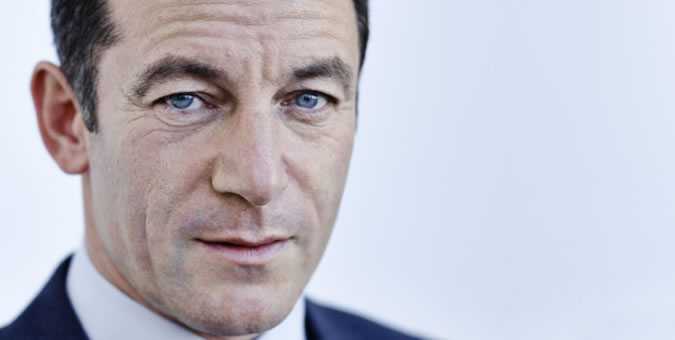 Jason Isaacs has unveiled a tribute to the war poet Wilfred Owen at the former hospital where he was treated for shell shock. Owen was sent to the Craiglockhart War Hospital in Edinburgh, where he met fellow war poet Siegfried Sassoon in August 1917. The site is now part of Edinburgh Napier University’s Craiglockhart campus.
The university already has a permanent exhibition to mark war poets’ work.

Earlier a Caithness flagstone bearing a quote from the poet “My subject is war and the pity of war. The poetry is in the pity” was unveiled by Isaacs, who is in Scotland with Theatre of War company, which produces ancient Greek tragedies for service members, veterans and their families.

Owen was killed in the final week of World War One, shot by German machine guns as British forces unsuccessfully tried to bridge a canal in northern France.

Isaacs, who plays Lucius Malfoy in the Harry Potter films, said: “This flagstone and its quotation will remind everyone who sees it that though the poets to emerge from the Great War have come to represent something culturally significant and revered, their inspiration was what all wars still provide; tragedy, terror and death. These were dispatches from the front line.”

The flagstone was donated to the university by Glen-Art, a military charity supporting former members of the armed forces.

It lies outside the old main entrance to the building as a permanent memorial to Owen and all those affected by the First World War and other conflicts.

Catherine Walker, curator of the university’s War Poets Collection, said: “It is a unique gift, which is a fitting tribute to all who have been affected by war, not only those officers treated at Craiglockhart War Hospital.”

Fiona MacDonald, founder and director of Glen-Art and a trustee of the Wilfred Owen Association, said: “We are delighted to be able to donate this beautiful stone as the first of many events and activities commemorating the centenary of the time Wilfred Owen spent at Craiglockhart, where he met Siegfried Sassoon.”